"Remember why you started!"
- unbekannt

A profound sentence, which I found. So simple, that you take it for granted, actually.
Of course, clear…”remember about your roots, original wishes and about your goals in your life!”

The range of interpretation is spacious. But is it really that easy? Well, recently I had to think very hard about this. It is everything else than simple. One can very light forget, what you wanted originally or what was the drive for a conscience action or intention. Maybe it lies on fate proposals and incisive experiences, which gave the kicking off, to reflect again on life.

And for sure, this is a good thing, because I remember myself again…

Since I was able to think, music played always a big part in my life. I can still remember pretty good, I think, I was about 4 or 5 years old, there were Elvis-Records from my father falling in my hands. I asked, who this was and got for an answer the first record put on. From the very first moment, I was fascinated by the warm and insinuating voice of this wonderful artist. The way, he sang the music/harmonies filled with his soul, took me in his spell.

So I started to imitate all the songs, which I liked, with the indwelling greenness and curiosity of a little child.

At that point really started everything…my love to the music and specially for Soul, Gospel and Jazz. Of course, in the following years my attention turned to many others, for me excellent interpreters, like Whitney Houston, Shirley Bassey, Luther Vandross, Aretha Franklin… as to call some.

With the support of my parents as well as other important persons in my life, I could live out this fervor as a child. A good friend possessed a professional recording studio, in which I made my first attempt at walking as a 7 year old in there. My first song that I ever recorded was “Yesterday” from the Beatles. This still exists on an old cassette. Yes, something like that was there on time ;-) The basis for the todays handling of my voice was set in this era, actually. Back then they worked extensively on single passages, the intonation of different passages from pieces. As a child, that kind of work sometimes appeared really tiring to me, I just wanted to sing, not repeating constantly pieces of sequences. But I always had very much fun. And I believe, it was worth it, till today…

One thing never changed since then, that I STILL WANT TO SING…

because it fulfills me and always makes very much fun. For me it is a valve, to express my emotions and to give others a good feeling.

In the Marketing there’s a mission statement:

“Keep it simple and stupid!” (KISS)

Admittedly, to this KISS-principle (the short form is nice, in fact) I have not sticked with my long preface, even though that a business manager slumbers in me. Nevertheless, for me, it was important to start my biography with the “Why am I a singer?”, because in my opinion this is more essential, than only to present you sequentially my professional career in the sense of a classical application.

This I want to catch up, strongly shortened, in the following for completeness:
I was born in Nuremberg and stood since my childhood as a singer for studio productions on the microphone. By the collaboration with important musicians of the Jazz- and Bluesscene, I developed pretty early my weakness for Soul, Jazz and Blues.

In 2005, after graduating in Business Administration, focal points on Marketing and International Business, I started my music career. Through the years, I took part on different contests, amongst in New York. I occurred with well-known musicians, for example with the singer and pianist Alfred Mc Crary, with the Jazzpianist Lloyd Wilson from Chicago, the pianists Joachim Junghanss, Jens Wimmers…, the saxophonists Lutz Häfner and Thorsten Skringer…, The Pavel Sandorf Bigband and others.

Gigs like by the german-american institution as a part of the celebration of the American Independence Day, Midsummer Night’s Ball in Fürth, Reception of the Bavarian Minister of State, Käfer Munich, German Principals Congress in Dusseldorf, citizen's feast Schwabach, Fastnacht in Franken (shrovetide in Franconia) of the Bavarian Broadcast, Lebenshilfe, Bavarian Alpha Television, Swiss Railway Company SBB in Zurich and so forth.

In 2008, I produced my solo album “kaye”. An explosive mix of Soul, Jazz, Latin and Blues, with well-known musicians.

"Remember why you started!" 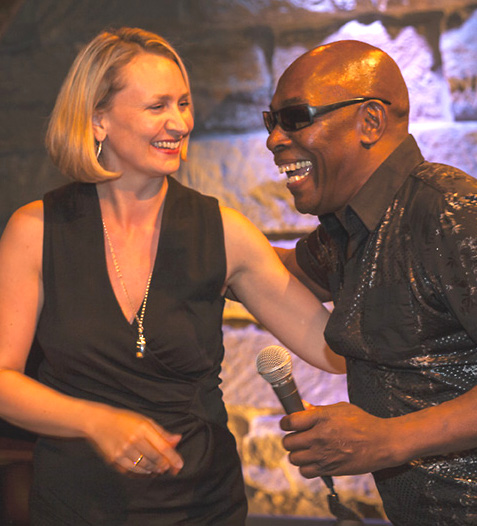